Public funding for the arts has been hurt by the downturn, so local groups have turned to small-scale private donors to offer micro-grants for starving artists. David Weinberg reports.
Listen to the story here.
Sloup blog
Posted by Arist Bailout at 9:13 AM No comments: 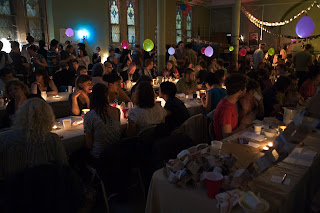 As the second part of a series on art, labor, and politics, I spoke with Jeff Hnilicka of FEAST, a Brooklyn-based community dinner that funds the work of emerging artists. FEAST will be hosting their next meal tomorrow evening, February 6, from 5-8 p.m. at Church of the Messiah, 129 Russell St, Brooklyn NY. The event is open to the public. - Jenny Jaskey
What is FEAST and how did you begin?
Jeff Hnilicka: FEAST has been going on for a little over a year and runs out of a church basement in Greenpoint. There are around twenty people who help facilitate it. We come from the art world, food world, and design world, and we are connected to ideas of collectivism and immediacy – things like zines, living room dance parties, bike rides, and dinners. Many of us are also involved with Hit Factorie, an artist collective.
FEAST grew out of our desire to investigate the collapse of cultural production in the face of emerging sustainable food production systems that were successful.
Read more here...
Posted by Arist Bailout at 1:19 PM No comments:

State of The Arts 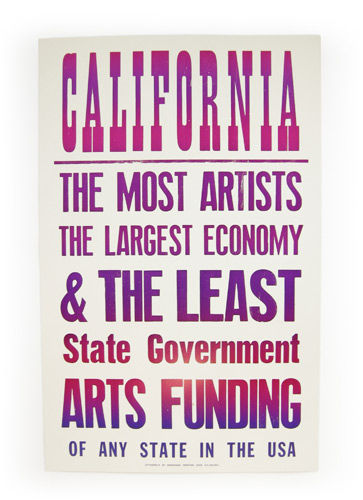 State of The Arts The Present Group
Posted by Arist Bailout at 6:29 PM No comments:

Email ThisBlogThis!Share to TwitterShare to FacebookShare to Pinterest
Labels: Arts Funding, State of The Arts, The Present Group

Art:21 - WAGE Against the Machine

Last September, as part of Creative Time’s Democracy in America: The National Campaign event at the Park Avenue Armory, activist group Working Artists and the Greater Economy (W.A.G.E.) stumped for the rights of artists to be compensated fairly for their labor by art institutions in the United States. The economy has taken a bigger hit since then, which makes W.A.G.E.’s work even more important. The Brooklyn-based collective was formed in 2008 by artists A.L. Steiner, K8 Hardy, and A.K. Burns, and the group’s expanding membership includes artists, performers, independent curators, and all others who share their cause. W.A.G.E. cites exemplar, working models beyond our borders overseas and overhead—organizations such as the Canadian Artists’ Representation / Le Front des artistes canadiens (CARFAC), whose efforts resulted in the 1988 Canadian Artists’ Representation Copyright Collective (CARCC), which legally established a fee schedule for artists to be paid every time their work is exhibited at a gallery, museum, or institution that receives federal funds.
Read more... Posted by Arist Bailout at 6:22 PM No comments:

THE artist Gordon Matta-Clark, who died in 1978 at age 35, loved to cook, but he could never quite unbraid his culinary passions from those of artmaking, with sometimes bizarre dinner party results. At one, recalled his widow, Jane Crawford, he cooked a lovely whole sea bass, but it emerged from the kitchen encased in a block of aspic nearly three feet long. He unmolded it, then gave the table a good kick, so that the aspic wobbled wildly and the bass seemed to fishtail upstream.
continue reading here. 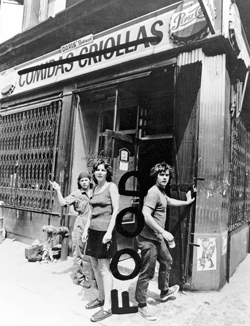 Posted by Arist Bailout at 12:08 PM No comments: